Today's airports are no longer people-packed holding cells. They're all-singing, all-dancing affairs, with the world's finest restaurants alongside libraries, clubs and spas. And if your flight gets cancelled or your plane's delayed, these are the airports where you'll want to get stuck!

Munich is known for having the world’s best VIP terminal, but you don’t need to be an A-lister to love this airport. We’re smitten with the sheer diversity of the airport’s culinary offerings, which includes a newly-opened, alpine-themed restaurant (complete with gondola in the middle). The airport also pulls out all the stops for special events; in recent years, the Christmas celebrations have included two ice rinks and 450 real Christmas trees. Last summer saw the unveiling of Surf & Style, the largest standing wave inside an airport (just in case you fancy hanging ten on your layover) and the airport even has its own brewery.

There are plenty of fantastic places to eat in Hong Kong, but some of its best cuisine can be found right inside the airport. There’s food from every corner of the world, and that includes an offshoot of Hung’s Delicacies, a Michelin-starred Hong Kong restaurant. We also love the fantastic amenities, which include an IMAX theatre and nap rooms, and the wonderfully short transfer times – it takes just 24 minutes to get from the airport to the centre of Hong Kong.

Transit through Dubai and you’d be forgiven for thinking that you’ve stepped into a five-star hotel: there are avenues of palm trees, gleaming silver decor and mist machines to keep passengers cool. If you find travel particularly stressful then make a beeline for the airport’s Zen Garden. Not that you’re likely to feel cramped – the airport’s enormous, and its Terminal 3 has the second largest floor area of any building on the planet. Perhaps unsurprisingly, there are plenty of opportunities to rid yourself of that remaining holiday money. It’s the only airport with a gold bullion shop, and passengers with a weakness for wine can drop £6,500 on a rare bottle of 1947 Cheval Blanc at the fine wine shop, Le Clos.

The second German airport to make the cut, Frankfurt airport is one of the busiest in the world, handling around 60 million passengers every year. The Airport City Mall has all the essentials to ease the pain of a long stopover, including a dry cleaning centre and hair salon. There’s also a branch of the famous Paulaner beerhouse, allowing you to sink a couple of steins without leaving the airport (soak up all that beer with Paulaner’s legendary jagerschnitzel), and a console-packed gaming room. It’s also the only airport to offer passengers tours. There are several available, including tours of the airport’s fire department, and there’s also a spectacular observation desk for budding plane spotters.

The Airports Council International has just awarded Incheon the world’s best airport for the twelfth year in a row. So, what makes it so special? To start with, it’s a great place to learn about South Korea. There are regular cultural performances and there’s even a Korean culture museum. Incheon is the airport where your bag is least likely to go missing – the airport has a 0.0001 per cent baggage mishandling rate, which means you’re more likely to get struck by lightning. In addition to seven gardens, there are free showers, two cinemas, an ice rink and a casino. If you’ve been cursed with a long layover, the airport also organises a range of transit tours which allows passengers to see some of South Korea’s most popular tourist attractions in a matter of hours. 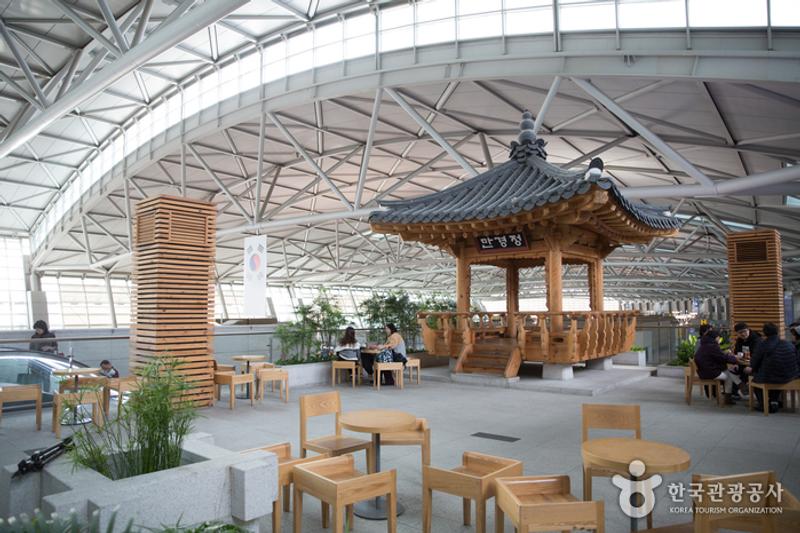 The fact that this airport is Canada’s busiest is even more surprising when you consider the fact that when it opened in 1938 it consisted of a tiny, shed-like terminal and a single runway. Art and food are the areas where it excels the most. The airport’s permanent art collection includes rare masterpieces by some of Canada’s top artists, and there are a number of temporary exhibition spaces – currently there’s a life-sized dinosaur in Terminal 1, and a collection of space-related memorabilia curated by staff from Toronto International Aerospace Museum. We also love the culinary offerings, which includes delicacies from all corners of the world. Our favourite spots to chow down include LEE Kitchen, which services up Asian-French fusion cuisine by award-winning chef Susur Lee, and Vinifera, where you can sample over 85 fine wines from around the world.

Nervous about flying? This is the airport for you. The airport has its very own WAG brigade – a team of animals on hand to calm passengers with a fear of flying. Most of the animals are dogs, but there’s also Lilou, a tutu-wearing pig who’s a qualified therapy animal. If creature comforts aren’t for you then there’s a Reflection Room for passengers in need of some time out, and the interactive children’s area is sure to be a hit with younger travellers. In addition to climbing apparatus, there are kid-friendly exhibits curated by San Francisco’s Exploratorium children’s museum. We also love the Aviation Museum in the international terminal’s main hall, where vintage aeroplanes dangle from the ceiling.

Changi Airport makes the cut thanks to the sheer diversity of its amenities. The dazzling array of gardens includes a dedicated cactus and butterfly garden, and there’s also an outdoor pool and fish pedicure spa. The airport’s art trail is a great way to kill a few hours, and in Terminal Three, there’s no need to panic if you’re running late for your flight – simply whizz down the tube slide which connects the upper and ground floors.

There are plenty of reasons to love Europe’s busiest airport. Passengers keen to learn more about The Netherlands will love Holland Boulevard, where they’ll find a miniature version of the country’s Rijksmuseum. There’s also the Nemo science museum and a library filled with books, iPads and other touchscreen devices. Keen to soothe away those post-flight aches and pains? Head to the XpresSpa, which is one of the largest spas inside an airport. You’ll be able to choose from a wide range of treatments, including deep tissue massages and energising facials.

There’s something seriously depressing about airports situated miles away from the closest city. Not so at Zurich Airport, which is eight miles from the city centre. But if you’re staying put thanks to a long layover, there’s plenty to do. Airport staff can organise tours of the Swiss Museum of Transport Lucerne, and you’ll also be able to hire inline skates and bicycles for a jetlag-busting whizz around the parkland which surrounds the airport. This is also the only airport where you can watch the pilots at work in their cockpits thanks to a special walkway leading from the observation deck.

Are you simply plane crazy about flying? Here are some ways to enhance your next flight:

How to find cheap flights to the US

Planning on heading across the Pond? Here’s how to find cheap flights to America for less.

The best time to book flights

Increase your chances of bagging a flight-related bargain.

These super-sized pieces of arm candy are sure to stand out on the luggage carousel.

Well we'd love it if you left us a review.
(It only takes 30 seconds, we promise!)